Modern astronomical observations now discovered the remnant of a nova explosion whose position corresponds to a celestial phenomenon described in ancient Chinese records. The discovery thus confirms one of the oldest astronomical observations outside the solar system. The innoFSPEC research group "Multichannel Spectroscopy" has played a significant role in this discovery.

The full English press release can be accessed here. For German news on this discovery, please have a look at the BMBF-Unternehmen-Region website. 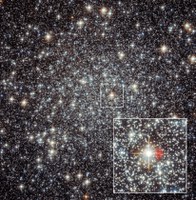